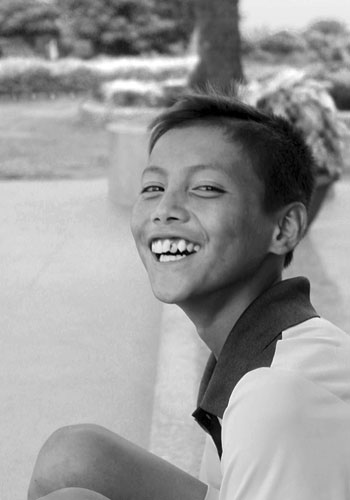 11-year old Joseph hails from Laitkor Rngi, a small village in Shillong, Meghalaya. Coming from a humble background, Joseph's father is a car painter while his mother is a home maker. Owing to the state of utmost poverty that Joseph’s family lived in, at a young age of 8, Joseph started off his day by going door-to-door selling newspapers and delivering water to be able to cover his school fee and a bus ticket of 15 rupees. Every day, after having earned a few pennies, little Joseph would head off to school to watch his school team play from a distance and silently imitate and learn football tricks in a corner. On his way back home, he would stop by at a local shop to catch glimpses of his favourite teams playing on the television. It was at the age of 9 that he developed a strong fascination towards football and began practicing daily with the village lads.

One day, in 2017, Joseph's passion for the sport made him follow one of his friends to a football coaching academy in Shillong. However, since he was not in a position to afford coaching, one of the coaches told him to try his luck at the Bhaichung Bhutia Football Schools (BBFS) trials that were going to take place in Shillong that year. With a passion stronger than all odds, Joseph stood outside the BBFS trials barefoot with only a 10 rupee note in his hand and a zeal to play in his eyes. It was then that one of our coaches spotted Jo's chemistry with the sport and asked him to appear for the trials. To Joseph's and everyone else’s surprise, he came out as one of the best players amongst a thousand participants and was offered a 100% scholarship at the BBFS Residential Academy.

Even though his parents did not support him at first, eventually they saw Joseph’s love for football and allowed him to fly to Delhi. Since then Joseph has been excelling not only in football but also in academics. He plays as a striker, idolizes Ronaldo and supported Belgium during the FIFA World Cup 2018. With the dream of representing India one day, Joseph wishes to make his parents, coaches and the country proud!

The total programme cost for sponsoring 1 child is estimated to be approximately INR 3,36,000. This is mainly divided into 7 heads – Personnel, academic tuition fees, infrastructure, lodging, food, apparel and competitions. The break up is given as follows:

IFF seeks your support in providing financial assistance to provide full scholarship to Joseph with the aim of transforming his life by making his a professional football player and giving him a chance to represent India.

Note: The name of the individual has been changed to protect his privacy